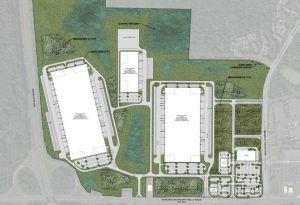 BURLINGTON TWP. – An imposing entrance that once welcomed shoppers to a mall here now looms over a field of rubble.

Demolition is well underway at the former Burlington Center, and the planning board this week is to consider plans for extensive new construction there.

A Maryland firm wants to build three warehouses with a combined 1.9 million square feet at the sprawling property off Burlington-Mount Holly Road near Interstate 295.

The project, known as The Crossings, is to go before Burlington Township’s planning board on Thursday, June 3.

The board also will consider plans for an unrelated shopping center with a Chipotle restaurant and up to four other tenants. The 12,000-square-foot project would rise next to a Lidl supermarket that opened last summer on the same highway, also known as Route 541.

The Crossings is being developed by an affiliate of a Maryland real estate investment trust, Lion Industrial Trust. The smaller retail center is proposed by a group that includes Vernon Hill II of Moorestown, the chairman and CEO of Philadelphia-based Republic Bank.

The two-level mall was built in 1982 by the Maryland-based Rouse Co., which developed Cherry Hill Mall in 1961 and Echelon Mall in 1969. The shopping center struggled with rising vacancy rates before closing when burst pipes flooded its interior in January 2018.

Demolition began at the 230-acre site in March and is expected to continue into September.

The warehouses could employ more than 1,000 workers in buildings ranging from 210,800 to 939,300 square feet, according to an environmental impact statement for the project.

The distribution centers would offer “loading stalls” for 336 trucks and parking stalls for more than 1,000 cars, according to the developer’s application.

Tractor-trailer access for the warehouse would be restricted to Burlington-Mount Holly Road, it says.

Retail uses, including at least three restaurants, would occupy about 43 acres of the property. Those buildings, expected to rise near the Bromley Boulevard intersection, would range in size from 2,850 to 55,655 square feet, the application says.

A representative of the leasing agent could not be reached for comment Tuesday.

The plan also calls for extensive landscaping to screen the project from a nearby residential neighborhood.

According to the environmental impact statement, the plantings would include more than 160 trees and almost 1,300 shrubs.